Hoard of 1,108 silver groats from the reigns of Edward IV, Henry VI, Richard III and Henry VII, and double patards of Charles the Bold, deposited circa 1505, from Hartford, Huntingdonshire. Discovered in 1964 and now in the British Museum 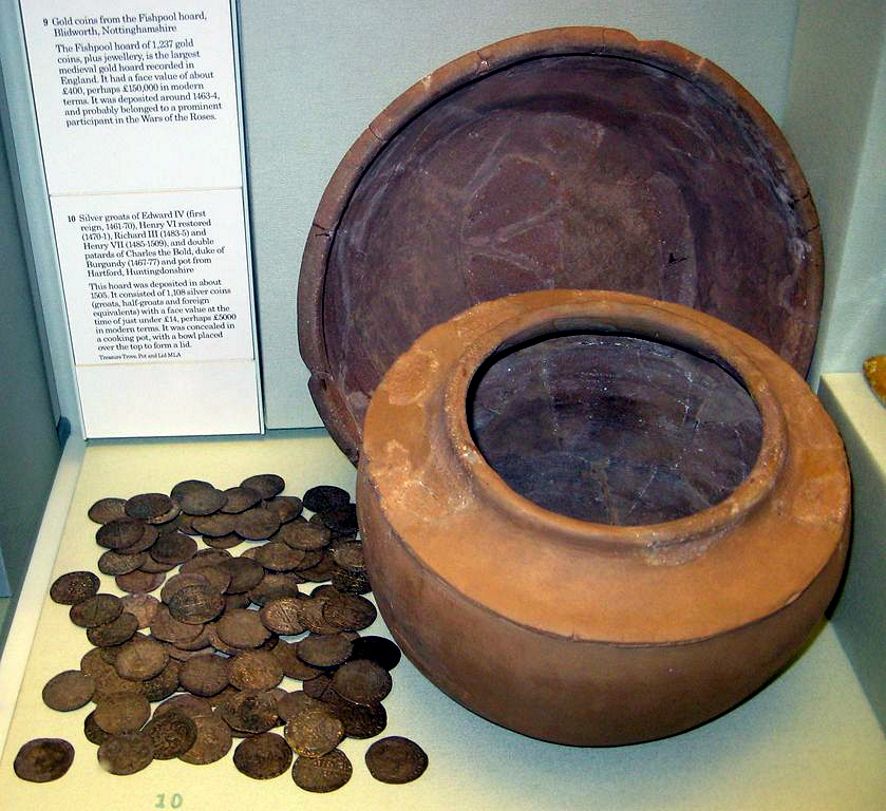 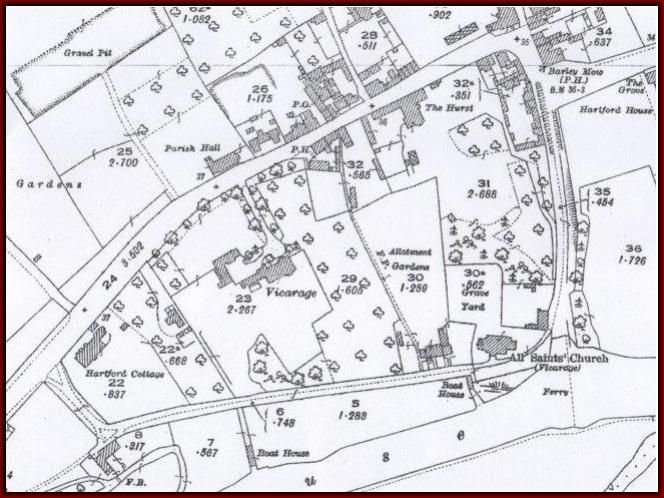 The map shows Hartford Road now Main Street and Church Lane as the main roads in Hartford in 1926.“Hartford Bypass” now known as Longstaff Way was not built until 1964.Two Huntingdon council workers were digging the new road when they discovered a hoard of over eleven hundred silver coins dating back to the 15th century. An inquest was held and it was found that the coins were treasure trove. The coins included Groats, half Groats, pennies, half pennies and French coins covering the reigns of Henry VI, Edward IV, Richard III and Henry VII. The Richard III coins were of particular interest as there were few in existence as he reigned for only 2 years. 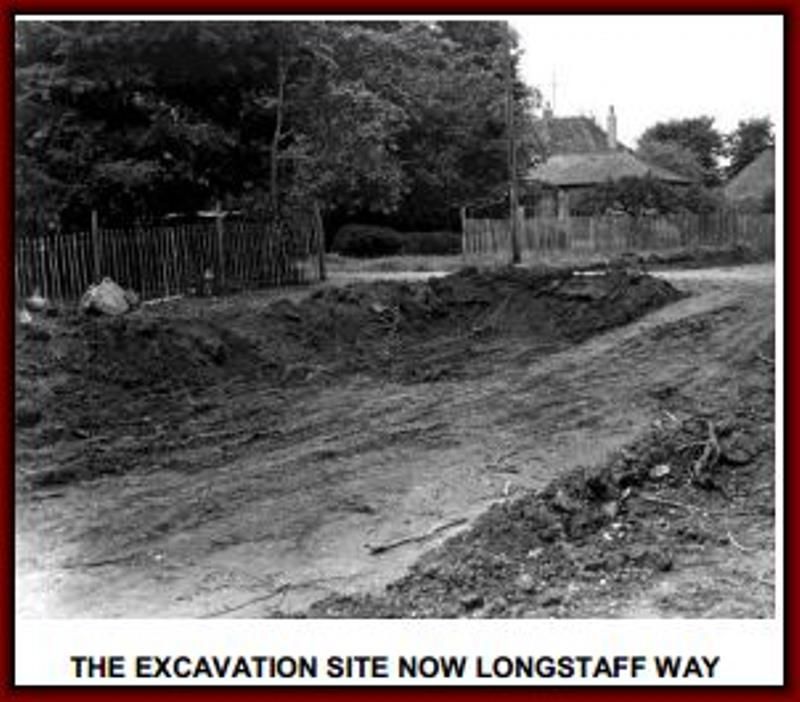 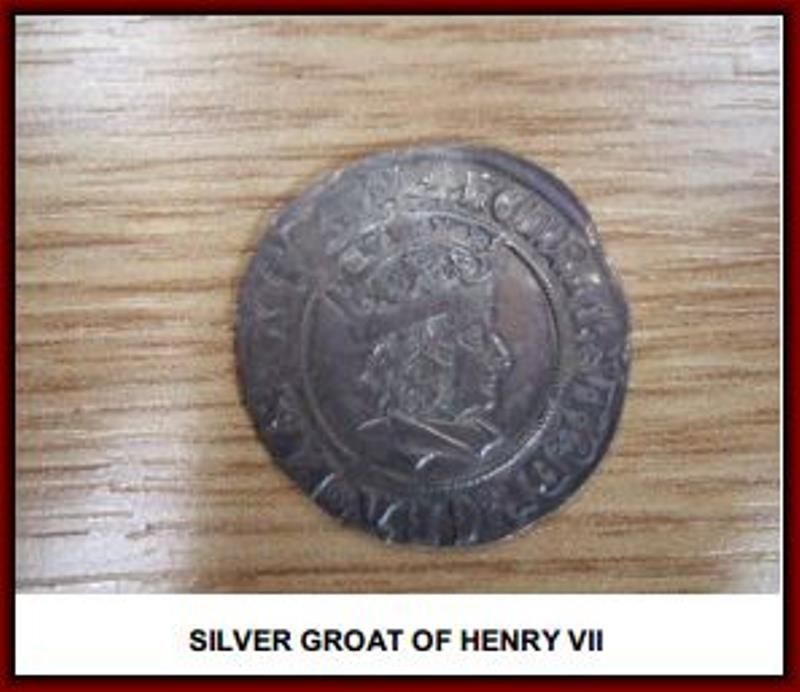 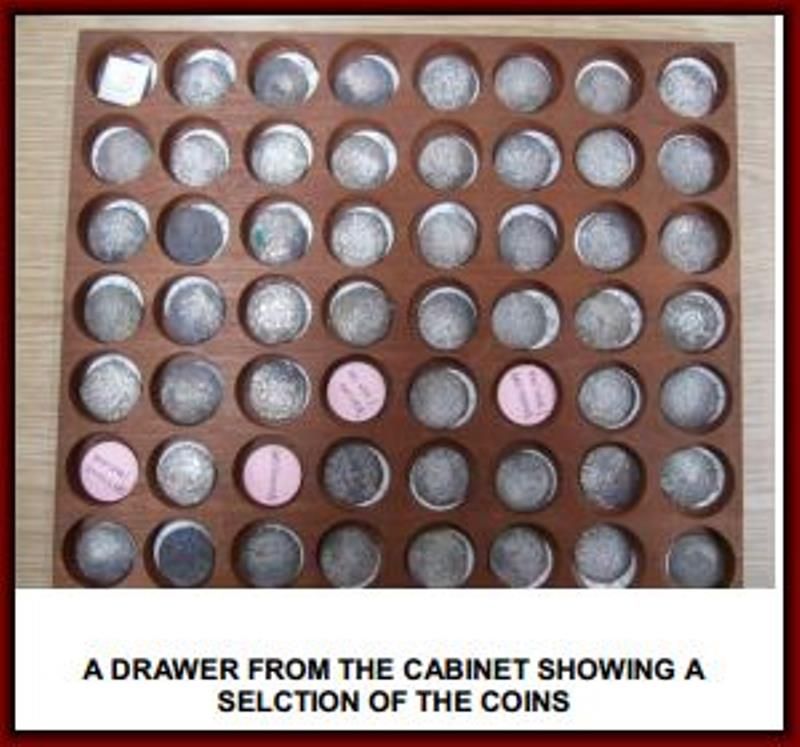 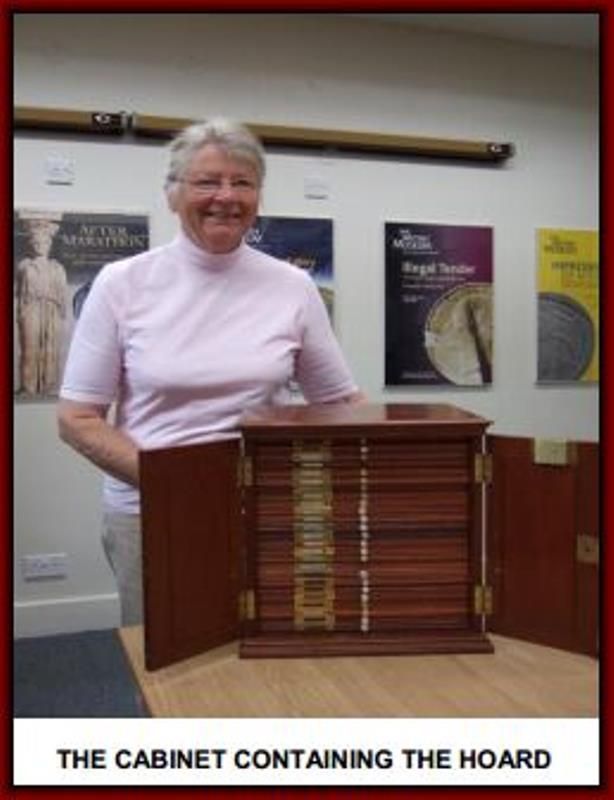 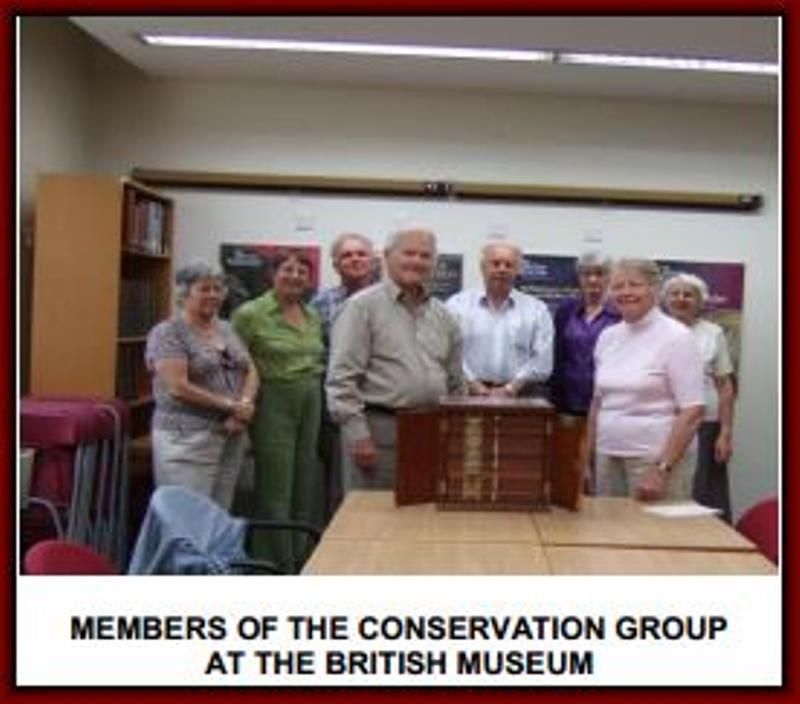 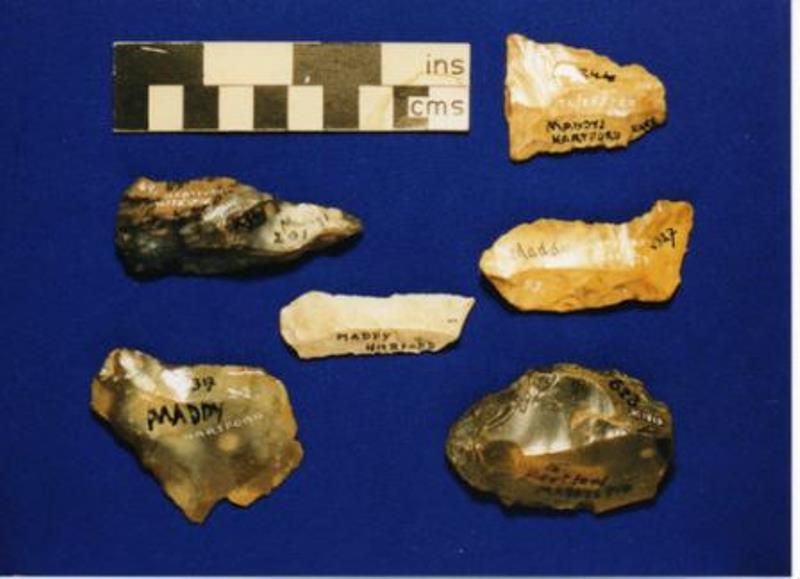 Paleolithic – Maddy’s Pit
Maddy’s Pit was situated on the East side of Sapley Lane. Frederic Maddy of Glebe Farm, Hartford recorded 1926-36. A group of six flake tools of grey flint, white flint, brown flint; a side scraper of brown flint and an attractive flake of slightly pattinated grey flint 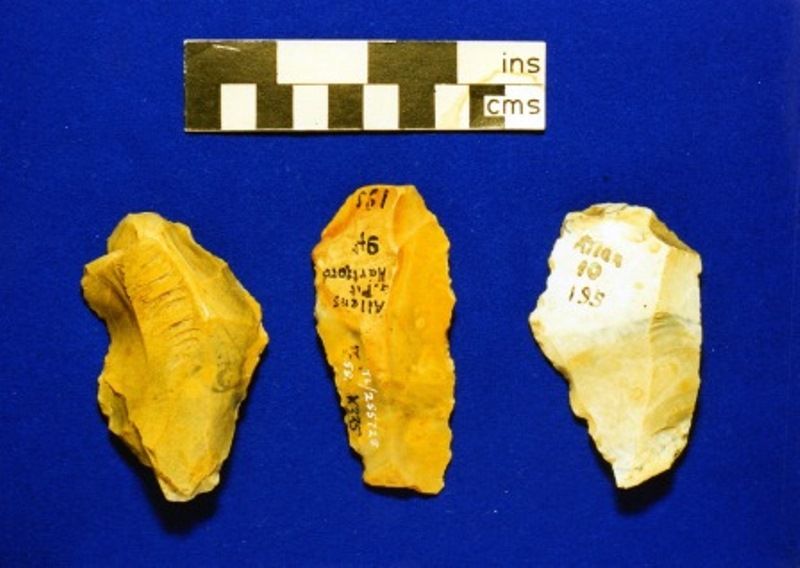 Paleolithic – Allens Pit
Allens Pit was situated on the west side of Sapley Lane. A group of three flake tools of grey flint, brown flint and yellow flint. 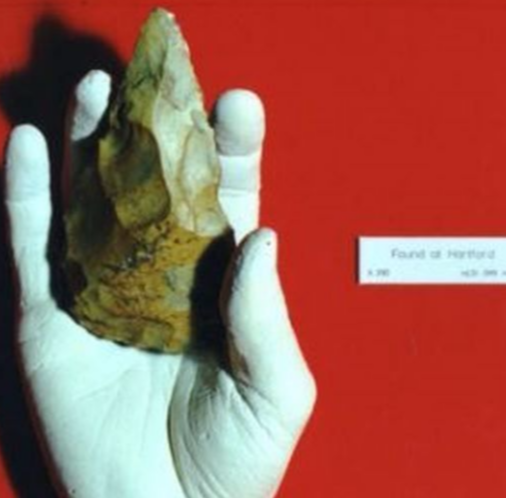 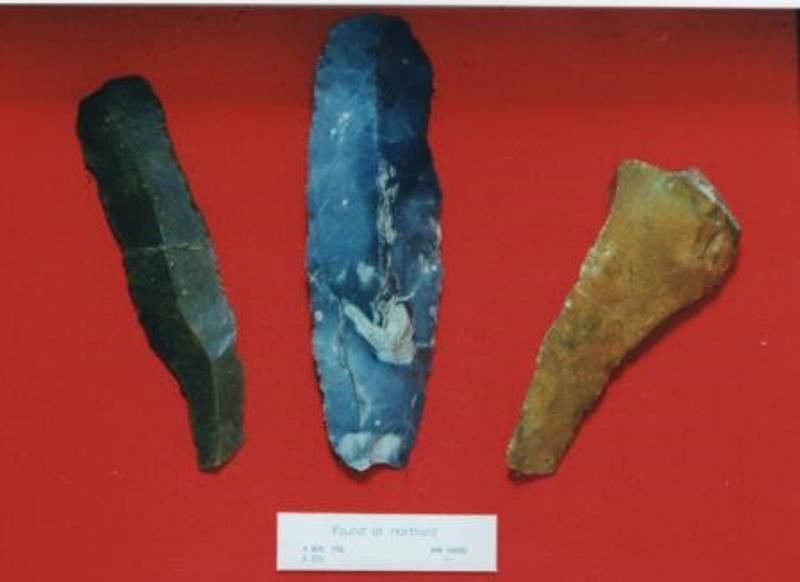 Flake tools.
A group of three. The flakes have been carefully chipped along the edges so they can be used for scraping 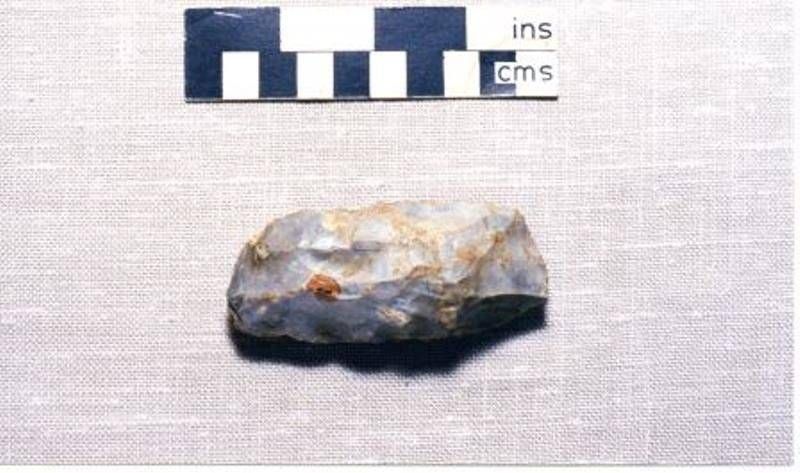 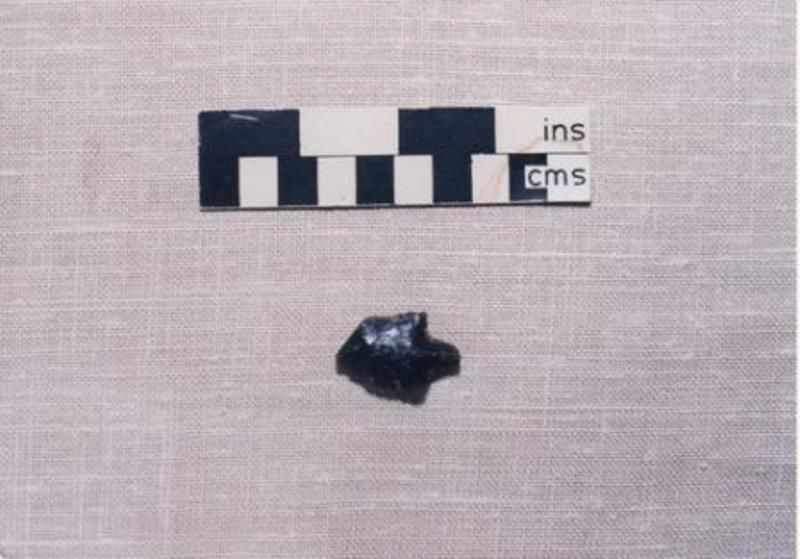 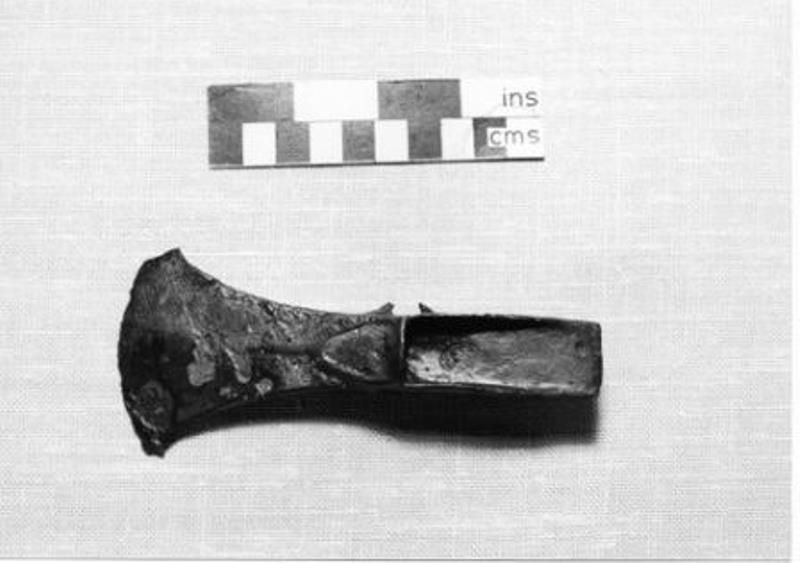 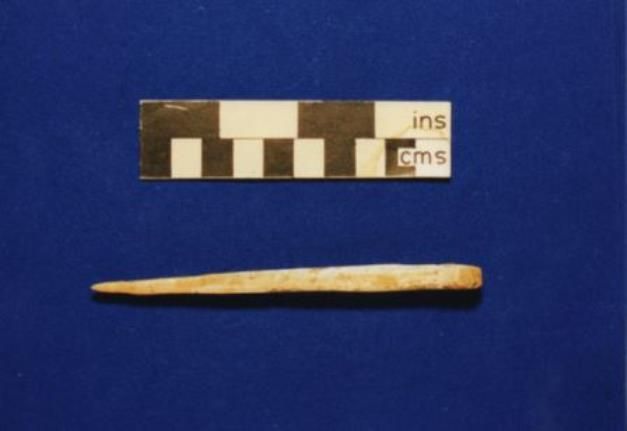 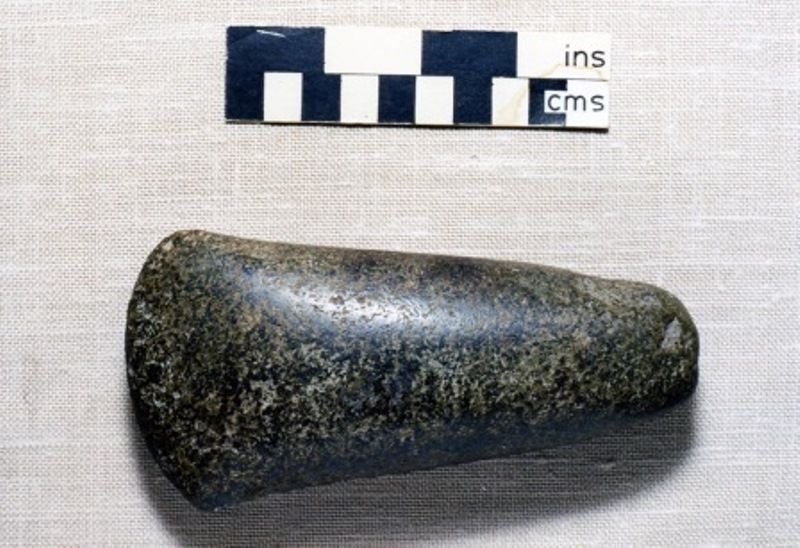 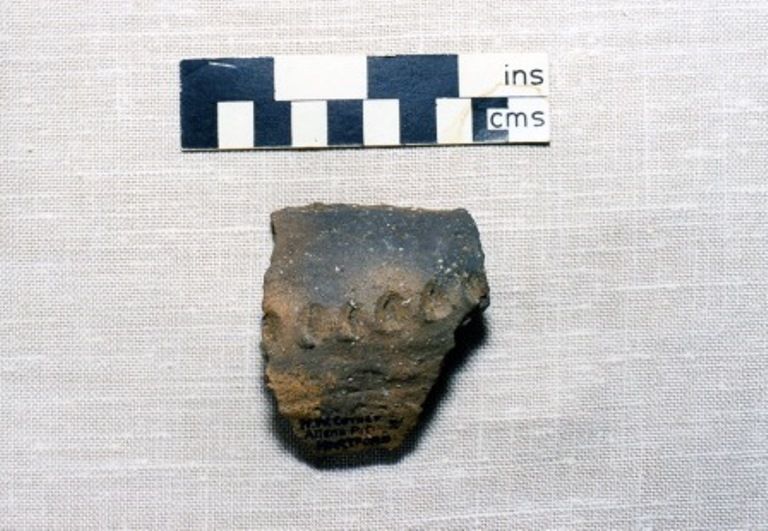 Shard of brown ware with row of fingernail impressions; handmade 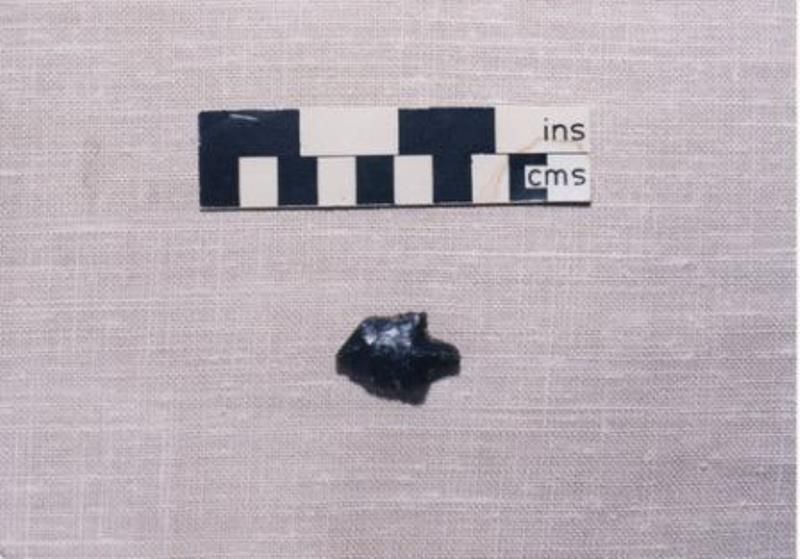 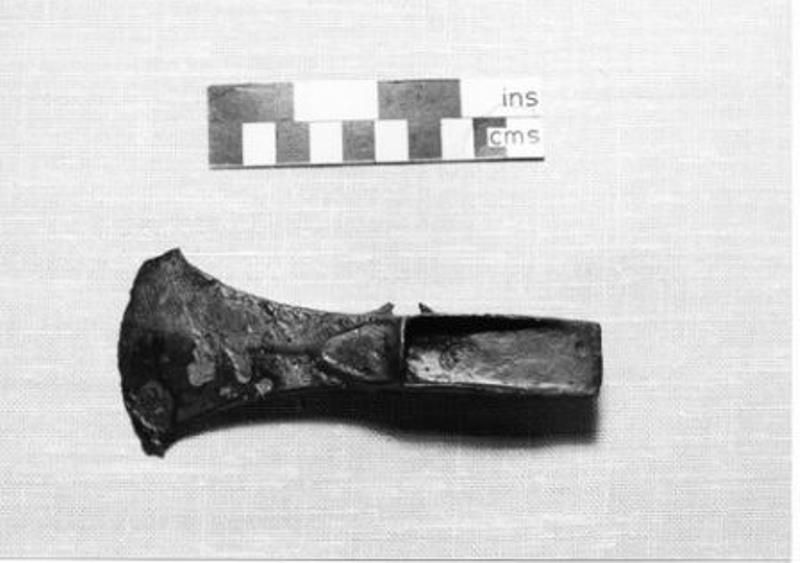 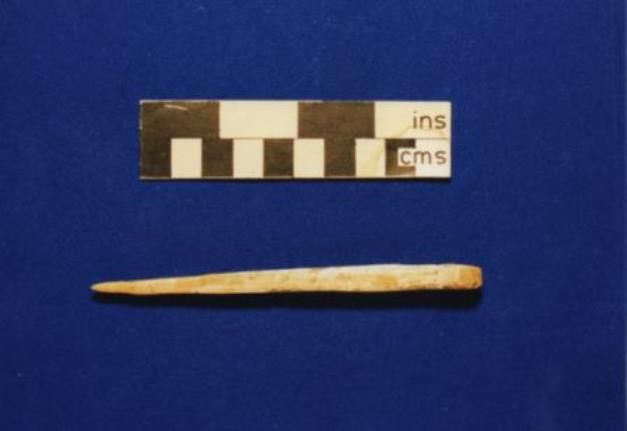 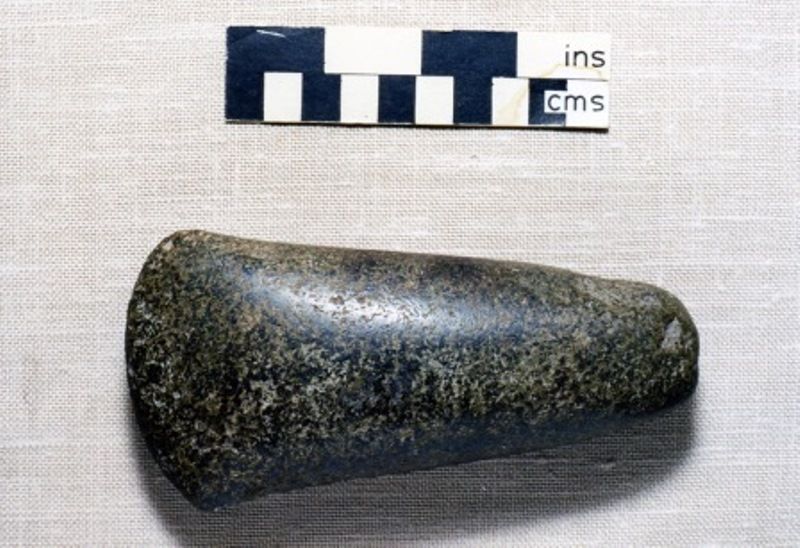 Church Plate of All Saints

Church plate is a collective term for objects made of precious metals.
.The Rev. E. G. Alderson deposited the items not in constant use, in 1932, for safe keeping in the Fitzwilliam Museum, Cambridge. They can be viewed by prior arrangement. 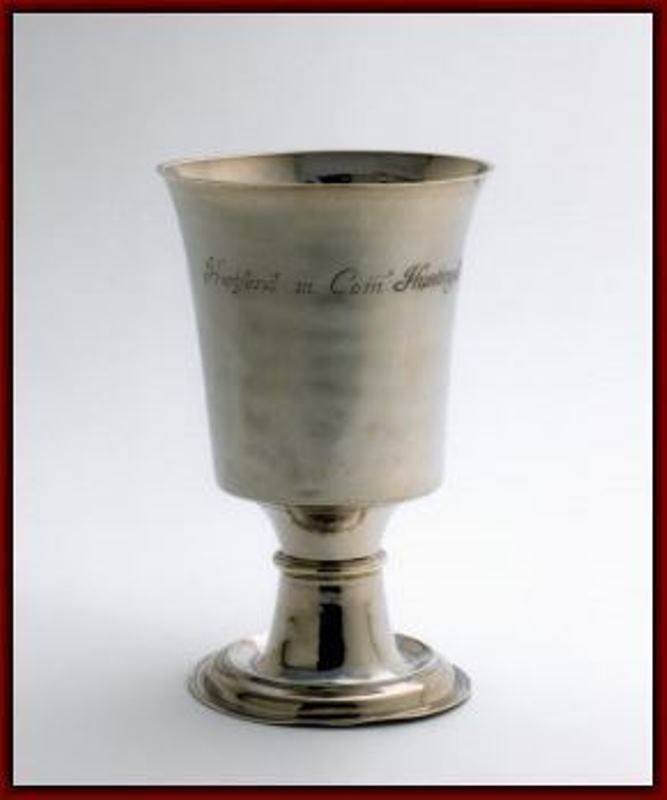 COMMUNION CUP
Description Silver; the deep bowl has an
everted rim over slightly sloping cylindrical sides and a flat bottom. It stands on a spool shaped stem with moulded girdle. The circular foot is stepped and slightly dished. The bowl is inscribed “Hertford in Com : Huntingdon”.
Period late 17th Century,William III and Mary II  1689 - 1690 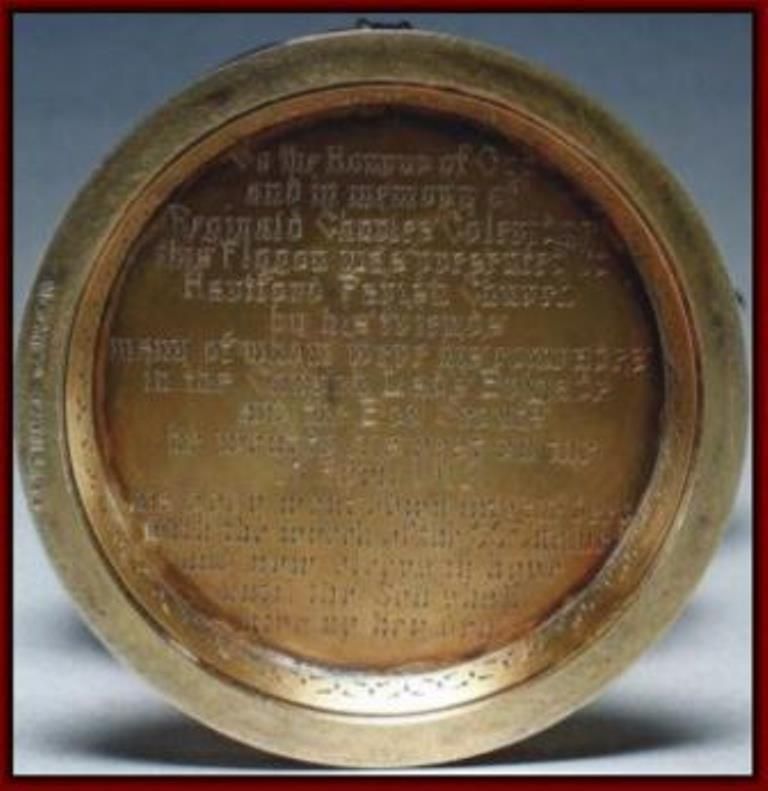 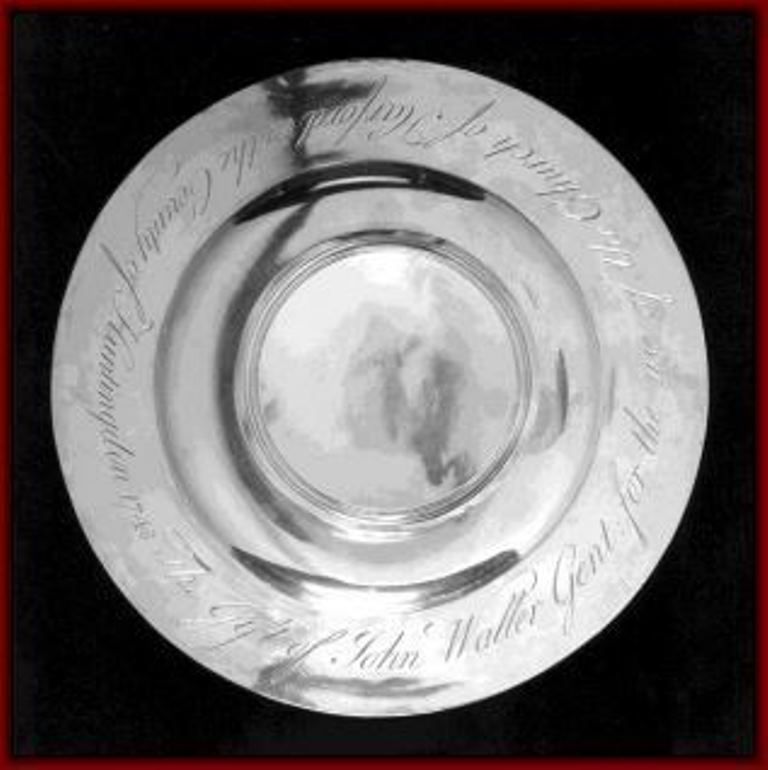 PATEN
Maker John Rowe
Mid 18th Century George II 1749-1750
Description Silver; circular with flat surface and slightly dishes sides and a wide border with a moulded rim;
standing on a spool-shaped foot
with flat base. The surface of the paten is engraved with the Sacred Monogram
“HIS” and cross and nails within a sun in splendour.
Underneath, round the rim, is inscribed “The Gift of John Walter Gent : for the use of the Church of Harford in the County of Huntingdon 1748”

Description 1907 Silver gilt and matted; the cruet has a baluster body and sparrow’s beak spout,and stands on a stepped circular spreading foot. A border at the top of the body is engraved with a Gothic pattern of leaves, beneath which the body is fluted and divided into four panels by applied straps decorated with punched circles and a rope edge. The foot stands on a pierced gallery beneath an applied rope border. The slightly domed hinge cover is surmounted by a cross rising from a ring of trefoils. The handle is formed from a rope edged circle within a a scroll, the area between being filled with a pierced grill of Gothic design. 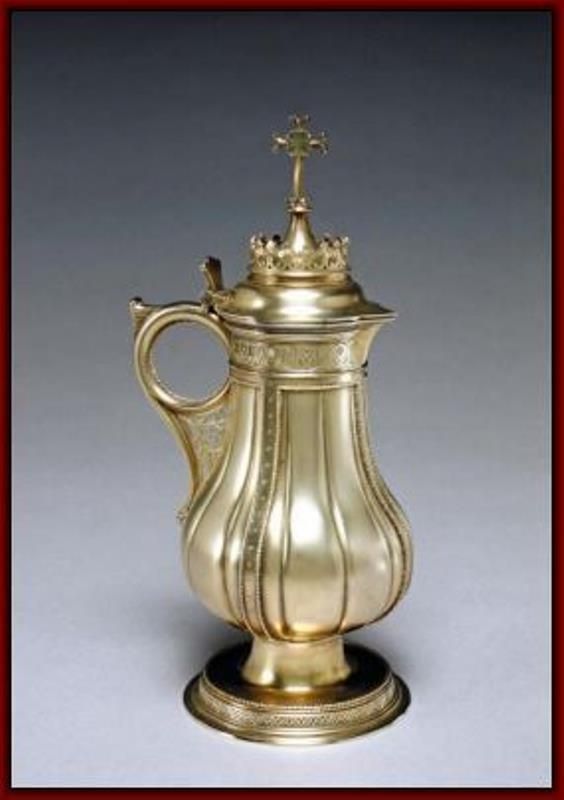 Please send us your ideas, bug reports, suggestions! Any feedback would be appreciated
webmanager@hartfordconservation.org.uk.